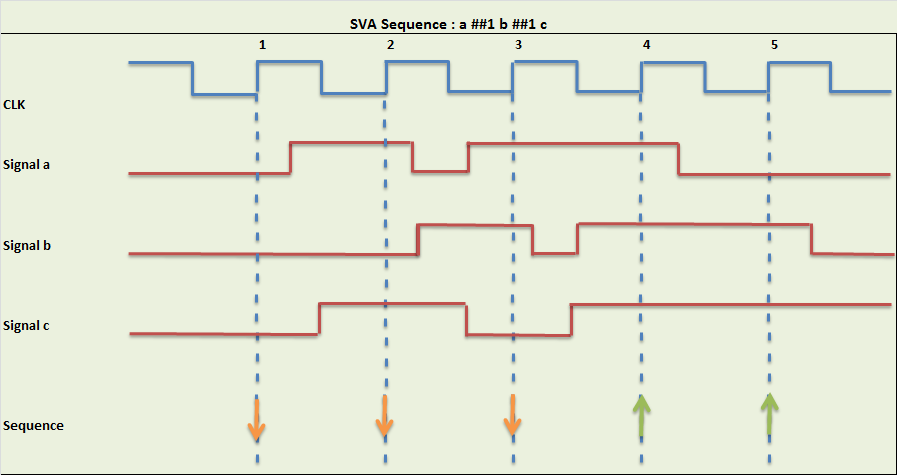 Sequence is a finite list of System Verilog Boolean expressions which matches along a finite interval of consecutive clock ticks. It evaluates Boolean expressions to true in each clock tick till the last expression. The major difference of sequence from a property is that, sequence does not have a success/fail status. Instead, it simply matches or not.

Following is a very simple sequence.

Please have a look at the below waveform to get better clarity. Sequence syntax is mentioned in LRM below.

This is to specify the number of cycles to wait from one signal/sequence to the other.

e.g. 1: The signal b will be active after 1 clock cycle delay, once a is active.

e.g. 2: After request is asserted, ack will be active 3 clock cycles later.

Delay – Fixed Range
This is to specify the number of cycles in a range to wait from one signal/sequence to the other.
e.g. ##[expr1:expr2] The expressions in the range must be 0 or greater and must be static at compile time. Also note that, the expr2 must be greater than or equal to expr1.

e.g. After request is asserted, ack will be asserted within 1 to 4 clock cycles.

Open Ended delay sequence will try to match the sequence till end of simulation.

A sequence can be declared in:

A sequence can be referenced/instantiated in a property, sequence, assert, assume, cover, or restrict statement.

e.g. A sequence can be referenced in a property

eg: A sequence can be referenced in a sequence

eg: A sequence can be referenced in an assert, assume, cover, or restrict statement.

A formal argument may be written in place of various syntactic entities, such as the following:

In the following code, my_seq2 has formal untyped arguments seq,cnt,sig and expr.

The actual argument of an untyped formal argument can be anything so that its substitution results in a valid sequence.

Named or by positional association

In the above sequence seq sig1, sig2 and sig3 are the formal arguments. The argument sig3 has default value. This sequence can be referenced in a property in the following ways. Below code shows, how actual arguments of a sequence can be applied by named or by positional association.

Default value 1 will be taken for sig3

Default value 1 will be taken for sig3

More about sequences can be found in other sections of “SVA Sequences”.

4 comments on “SVA Sequences I : Basics”